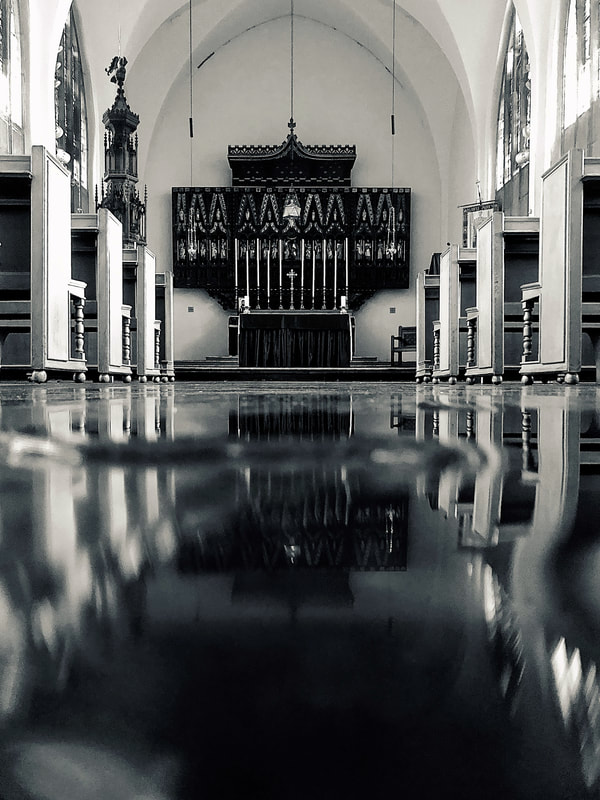 St Agnes' Kennington Park is a Church of England parish church.
Worshipping in the catholic tradition, it is part of the See of Fulham, and
​under the pastoral care of the Rt Revd Jonathan Baker, Bishop of Fulham

The crisis of Coronavirus is tightening about us.
The Archbishops of Canterbury and York published a letter on Tuesday 24th March stating that:
'our church buildings must now be closed not only for public worship but for private prayer as well.'
It is hard to put into words how much this saddens me.

St Agnes is now completely closed until further notice.
As and when further information becomes available I will update this website.

That said, the prayer and pastoral work of our parish continues.
If anyone wishes to contact Fr Simon or I, please do so by the usual means.

I will publish an electronic news sheet along the lines of our weekly pew booklet
(under the name of our old church magazine), each Sunday
(and on Maunday Thursday and Good Friday), as long as we are shut.
See 'Anno Domini' on the drop-down menu at the top of this page.

On a more practical note I need to mention the thorny subject of money.
Like many other organisations, St Agnes' finances have fallen off a
cliff since the closedown, but our outgoings remain undiminished.
We are now financially sustained only by those who have in the past taken-out direct debits.
Many more are part of the envelope scheme. During these days whilst we cannot meet,
might I ask those of you involved to continue to use your envelopes week-by-week,
that when we meet again, St Agnes will have at least a little money to get us by.

And... if there is anyone out there who would care to make a donation
​to the life and work of our community, please get in touch.

Be assured of my prayers.
I wish you all (and all for whom you have a care),
​well, in these very peculiar times.

'Quote of the day'

Saturday 4th April
Holy Week is almost upon us. A quote today I think to set the scene.

William Penn (1644-1718) was a writer, early member of the Quakers,
and founder of the English North American colony of the Province of Pennsylvania.
A deeply religious man, he wrote numerous works in which he
exhorted believers to adhere to the spirit of Primitive Christianity.
He was imprisoned several times in the Tower of London because of his faith.
His book No Cross, No Crown (1669), which he wrote whilst in prison,
is a classic of theological literature. This quote is from that book:
‘No pain, no palm; no thorns, no throne; no gall, no glory; no cross, no crown.’

Friday 3rd April
On Monday (when quoting from the very great black scholar Origen),
I mentioned St Clement of Rome, one of his teachers – so something from him today.

St Clement of Rome is considered to be the first Apostolic Father of the Church,
one of the three chief ones, along with Polycarp and Ignatius of Antioch.
Clement's only extant, uncontested text (the First Epistle of Clement),
is a letter to the Christian congregation in Corinth.
It is considered the earliest authentic Christian document outside the New Testament.
​Today’s quote is taken from it.

‘Love admits no schisms: love gives rise to no seditions: love does all things in harmony.’

Thursday 2nd April
Today something a little different… taken from The Wind in the Willows.
I first read it ‘properly’ in my late teens and have read it once a year, every year, ever since.
You may think me odd for doing so, but there is more to The Wind in the Willows than meets the eye of most readers, whose interests tend to focus on the slap-stick character of Toad: ‘poop-poop!’

Kenneth Grahame spent many un-fulfilled years working in The Bank of England
before being forced into retirement encouraged him to write.
The Wind in the Willows was written for his son, Alastair, collated from the bedtime stories he told him.
Tragically Alistair (just short of his 20th birthday), ended his life by putting his head on a railway track.

Most reprints of The Wind in the Willows omit its secret heart, chapter seven:
The Piper at the Gates of Dawn (which Pink Floyd pinched for the title of their first album).

As Mole and Rat conduct their night-time search for the lost son of Otter,
they become aware of a haunting melody carried on the wind,
which irresistibly draws them to a patch of earth
over which a sense of dread, wonder, and majesty hangs.
Here, in a sacred grove, they encounter a beatific vision of Pan.
Transfixed, unutterably at peace, they bow in worship.
And just as quickly, the vision disappears and their memory with it.

Pan’s gift to Mole and Rat is both a fleeting glimpse of himself and a veil of forgetfulness
so that they would not linger on the experience to the neglect of everything else.
Having experienced the undiluted beauty and glory of God,
how could they go back to: ‘messing about in boats’?

So Greene reminds us: ‘For this is the last best gift that the kindly demi-god
is careful to bestow on those to whom he has revealed himself in their helping: the gift of forgetfulness.
Lest the awful remembrance should remain and grow, and overshadow mirth and pleasure,
and the great haunting memory should spoil all the after-lives of little animals helped out of difficulties,
in order that they should be happy and light-hearted as before.’

I promise tomorrow’s effort will be shorter…

Wednesday 1st April
Today the Church of England honours Frederick Denison Maurice (1805-72).
He was an English Anglican theologian and one of the founders of Christian socialism.
Two thought-provoking quotes from him:
the first taken from a series of sermons he preached at Lincoln’s Inn Chapel in 1849
and the second from a book with a rather long-winded title published in 1843
The Kingdom of Christ: Or, Hints Respecting the Principles, Constitution, and Ordinances of the Catholic Church.
Why does no one write book titles like that anymore? They really ought to - its great.

‘The Lord's Prayer may be committed to memory quickly, but it is slowly learnt by heart.’

‘We do not cease to be children because we are disobedient children.’

Tuesday 31st March
Today the Anglican Calendar of Saints honours John Donne (1572-1631).
This poem (one of Donne’s Holy Sonnets), called Sonnet X
is otherwise known by its first line, Death, be not proud.

‘Death Be Not Proud presents an argument against the power of death.
Addressing Death as a person, the speaker warns Death against pride in his power.
Such power is merely an illusion, and the end Death thinks it brings
to men and women is in fact a rest from world-weariness for its alleged “victims.”
The poet criticizes Death as a slave to other forces: fate, chance, kings, and desperate men.
Death is not in control… Finally, the speaker predicts the end of Death itself.’

'Death, be not proud, though some have called thee
Mighty and dreadful, for thou art not so;
For those whom thou think’st thou dost overthrow
Die not, poor Death, nor yet canst thou kill me.
From rest and sleep, which but thy best pictures be,
Much pleasure; then from thee much more must flow,
And soonest our best men with thee do go,
Rest of their bones, and soul’s delivery.
Thou art slave to fate, chance, kings, and desperate men,
And dost with poison, war, and sickness dwell,
And poppy or charms can make us sleep as well
And better than thy stroke; why swell’st thou then?
One short sleep past, we wake eternally
And death shall be no more; Death, thou shalt die.'

Monday 30th March
A quote today from one of the greatest Biblical scholars in the history of the church.
Origen, born in Egypt in 185AD, was a person of colour. Some of his most impressive
concepts on religion were taught to him by another African teacher, Clement.
Origen won wide acclaim for his lectures in Rome, Caesarea and Jerusalem.
Without question, he played a vital part in the foundation and the
fabric of what the Christian Church was to become. These words are his:
‘He makes Himself known to those who, after doing all that their
​powers will allow, confess that they need help from Him.’

Sunday 29th March
Leif Enger: ‘Real miracles bother people, like strange sudden pains unknown in medical literature.
It's true: They rebut every rule all we good citizens take comfort in.
Lazarus obeying orders and climbing up out of the grave - now there's a miracle,
and you can bet it upset a lot of folks who were standing around at the time.
When a person dies, the earth is generally unwilling to cough him back up.
A miracle contradicts the will of the earth.’ Read John 11:1-45 today.
​
(See 'Anno Domini' on the drop-down 'menu' at the top of this page for this week’s bulletin)

There are also other direct bus links from Brixton,
New Cross and across South-East and Central London.
Use the bus stops on Kennington Park Road,
Camberwell New Road and the Oval

26th April: Rob Burton (Saxophone)
Rob Burton is a classical saxophonist now studying in my second year
with Huw Wiggin at the Royal Academy of Music in London.
In 2018, he won the televised Woodwind Category
Final of the BBC Young Musician 2018 competition,
​becoming the first ever saxophonist in the grand final.

24th May: Daisy Lihoreau (Oboe)
Daisy Lihoreu grew up in Cambridge before moving to London
to study oboe at the Guildhall School of Music and Drama.
Accompanied by Matt Geer

14th June: Nigel McClintock (Organ)
Nigel McClintock was born in Belfast and studied at the Royal College of Music.
He has worked as an organist at St Albans Cathedral, Croydon Minster,
St George’s, Belfast and, most recently, St Peter’s Cathedral, Belfast.
He is an acclaimed vocal teacher and conductor, taking his choir to sing for the Pope.
Duets accompanied by Matt Geer